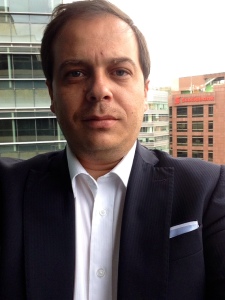 Andrés was named by Chambers & Partners, as Lawyer leader in the field of Intellectual Property for Colombia 2015, 2016 and 2017: “Andrés Izquierdo is well recognized for his copyright work within the IP market, particularly on matters related to the entertainment sector.” Clients praise Andrés for his “compromising, attentive and responsible” approach to matters.

Andrés has experience as counsel to companies such
as Sony Music Entertainment, Inter American Developing Bank, Ministry of Culture, Cinecolombia, RCN TV, among others. Has experience in the areas of technology, entertainment, advertising, and internet, in addition to his experience in litigation and arbitration in Colombia and in the Court of Arbitration of WIPO in Geneva, Switzerland.

Andrés is frequently invited to give talks and lectures on Intellectual Property, Filmmaking business, he regularly publishes articles on film, copyright, trademarks and patents, and is a visiting professor and researcher at universities in Colombia and the United States.

Author of the Colombian Cyberlaw Book for Wolters Kluwer International Encyclopedia of Law.